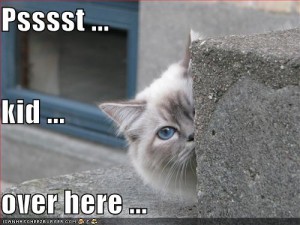 “How many people with short attention spans does it take to screw in a light bulb-wanna go on a bike ride?”

An article from Ryan Lawler on GigaOm the other day, the ubiquity imperative and the economics of attention shines a bright light on the importance of ubiquity among content companies clamoring for the attention of consumers. It struck a chord with me in the context of libraries from the simple fact that patrons are always customers to companies, in and out of the library.

While the post speaks specifically to video content, the message is clear:
“…consumers are now in charge of when and how they [consume] content. No longer content to be stuck to someone elseâ€™s schedule, consumers expect to be able to access their favorite content whenever they want and on a wide range of devices. As a result, the media companies that will win are those that recognize the need to be everywhere.” Full GigaOm Article here

Libraries have to be everywhere, on every device, to compete for patron attention. More time and money to spend, more technologies to sign up for and support. Not great news, but also not entirely true.

The strategy many libraries are implementing to solve this: Pick and choose your battles by choosing ubiquitous technologies rather than trying to be everywhere. For example, in mobile technologies, if you want to reach the largest amount of patrons on their mobile phones, you have 2 great choices: voice calls and text messaging. All mobile phones, smart or not-smart (aka “feature phones”) have both capabilities and are used by nearly everyone. At Mosio, we say “texting is the new talking”, not because we don’t enjoy talking to people, but because people are texting more than they’re talking on mobile phones. It’s simple, more efficient and enables time-shifting for busy schedules.

There are some amazing mobile technologies in the world. If we had unlimited resources and time, I’d have a developer working on as many as possible, but I don’t know any organization that has unlimited resources. With mobile messaging utilized twice as much as voice calls on mobile phones in the U.S. and around the world, we happily have our hands full offering solutions available to the largest amount of mobile users.