I was intrigued by the news that both President Obama and Russian President Medvedev would prefer to communicate with each other via texting and email.Â  It seems as if Obama’s much-discussed addiction to his Blackberry before moving into the White House still influences his communication customs.Â  Some habits are hard to break but it also helps being the leader of the free world. 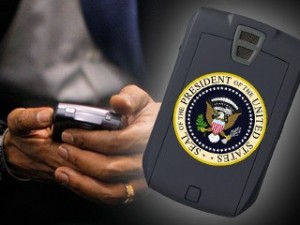 What really grabbed my attention was the mention that both Obama and Medvedev would rather communicate with each other directly than involve their staff members having to print out messages and deliver them by hand.Â  (Somewhere out there a White House staffer is looking for a new internship.)Â  Truly the speed at which you get information is important and sometimes saving a few extra minutes makes all the difference.

The notion that the world’s leaders can all text and email each other from their mobile devices adds quite a wrinkle to the term International Diplomacy.Â  International agreements, arguments and accords can now develop and take place via the clicking sound of QWERTY keypads.Â  Iâ€™d like to point out that Medvedev uses a decidedly less compact mobile device. 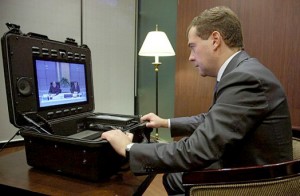 How this affects and changes a process that used to be carefully prepared and reviewed may be too hard to tell but the truth is that people will always want to find ways to make communication easier, more effective and more accessible.

This got me thinking.Â  If I was Obama would I want to be able to reach Medvedev via SMS?Â  Of course!

Obama: “OMG thanks for your help at the nuclear security summit.Â  I told you that DC in the spring is nice.”

Medvedev: “No worries.Â  Hey, while I’m in town can you get me tickets to the Hockey Playoffs?Â  Ovechkin FTW!”

Obama: “Settle down!Â  It’s the Blackhawks time!Â  Let me see what I can do, brb.”